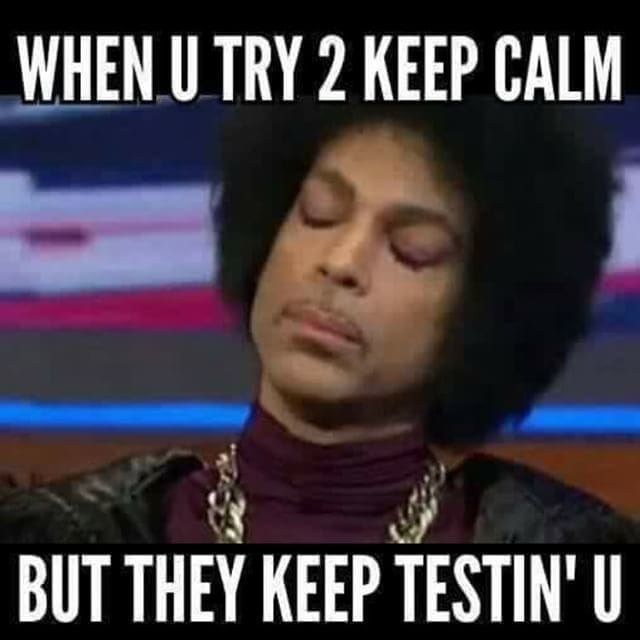 I would say I have a lot of character flaws. Yesterday I became aware of something new to add to the list and I’ve been crying about it ever since.

I’ve known for some time about my inability (or unwillingness?) to control my emotions. I tend to let them dictate how I react to people instead of, firstly, getting them in check. I’ve gotten better about it when wanting to respond to someone online, but that’s way easier. Before choosing to respond, you can simply step away from the computer for as long as you want in order to gain a calmer and more rational and loving perspective. But, being in the actual moment and presence of others is a completely different story!

So, this new self-revelation I received may not be quite that new after all, but it is something I now have a better descriptive word for and a deeper conviction over. . .

or lack thereof, I should say.

I lack tolerance for people.

There. I said it.

Usually when you hear of intolerance you think of a left-wing or right-wing thing, especially in this current climate we now find ourselves in. But really, it’s a human thing. It’s a sin thing.

For me, when someone starts saying something that I find ridiculous, insulting, offensive, untrue…my innards get twisted and SOMETIMES I respond in a way I usually tend to regret. And not just in conversation but also when someone is behaving in a way I find disrespectful.

For example, when neighbors were lighting off extremely loud fireworks (and it wasn’t the 4th of July yet) for an hour I became infuriated because, not only did it shake my house, but my animals were freaking out. They heard me across the street expressing my disapproval (and perhaps I wanted them to). I was embarrassed when I found out they had heard me. Rick wasn’t too pleased either since he’s friends with them. I have since apologized and they apologized as well. All is well but I feel the damage has been done (on my part). Not a very good first impression since I hadn’t technically met them yet.

And that’s just ONE example of my intolerance. Another example? Irritation over the fact that my new neighbor’s son keeps putting car parts on top of this newly sprouting lilac tree which had been cut down after the prior owner was evicted. I wanted it to be left alone to grow once again to it’s towering stature of privacy and sweet perfumes. (Our houses are so close they practically touch.) I miss its cascading branches that once swept the edges of my first level rooftop which meets my second story kitchen window. It’s not even on my property but I get pissed every time I see something new on top of this plant!!! What the hell is wrong with me?!?! Yeah, sounds like I have a case of self-righteousness, doesn’t it?

I’m sure there are times when speaking out against something is appropriate, but in my case…nope. Let’s take yesterday, for example. My sister-in-law started saying things I strongly disagree with so I got up and went into the other room in a feeble attempt to avoid responding. Problem is, I could still hear her. She was speaking out such negativity toward my husband that I could feel myself becoming enraged. Never even mind what she was saying about cholesterol and heart attacks (all misinformation, by the way), but when she started telling Rick they should both get tested for Alzheimer’s because of their MS; that they both “probably have” Alzheimer’s . . . that’s when I begged Rick for us to leave. I couldn’t take it. Not sure what she said from the other room at that point but whatever it was it led me to exclaim loudly that I don’t need to hear about how my husband probably has Alzheimer’s.

“I have enough shit to deal with.”

To that I scoffed to which she laughed.

I thought about her “LIKE WHAT?!” question. I was insulted by it. Offended. Especially since she doesn’t even know anything about my life or what our struggles have been or still are. It felt as though she were implying I have a care-free life. Yes, I don’t have a whole lot of responsibilities at the moment, but that in it itself is a weight for many reasons; none of which I care to get into. It’s a sore spot for me and I’m pretty sure she wouldn’t understand anyway.

When I said I have a lot of shit to deal with, I simply meant I didn’t need unnecessary worries added to my life, to OUR life. I probably should have said RICK doesn’t need more shit to worry about (well, I shouldn’t have said anything . . . I think we established that already). He’s got enough stress on him as it is with work, finances, and his health. She doesn’t see any of that. Yes, it is fortunate that I do not have to look after both my parents like she is currently doing. I understand that. She has a lot on her plate right now between a full time job and having to help out her parents and perhaps that is where her mind was at when she called me out with that response.

But why did I get so angry in the first place? I’ve been thinking about this very question a lot. Why did her words toward Rick anger me so deeply? It’s because it felt as though she was declaring that she and Rick both indeedily-doo have Alzheimer’s. No, life can’t always be roses, but there’s no need to unnecessarily add new issues to an already boiling pot. There’s no need to create new worries that are probably all for naught.

She likes to project such negativity onto others.  It felt like she was actually cursing him and herself with this declaration and every fiber of my being needed to reject this evil. Of course, I don’t think she was trying to be mean or hurtful. This is just how she is and most people (especially those with no faith) do not understand the power that mere words can have . . .especially in the spiritual realm. But I think it triggered something deep within me that I just couldn’t (okay, wouldn’t) ignore. I chose to react . . . poorly. I wish I had remembered to rely on the Lord FIRST and then think of how to point out what I was sensing in the spirit in a loving manner (but only if Holy Spirit was guiding me to do so). Otherwise, I should have just kept my big mouth shut.

What’s really terrible is that we went down there to visit Rick’s mom and dad because they are both struggling. His mom, Linda, has dementia and it’s been getting worse. And she falls a lot (I guess she has had several mini strokes from what I overheard Cathy telling Linda in the other room) and can’t do basic things for herself anymore. Charlie, Rick’s dad, just had his bladder removed and is recovering at home. He’s been very emotional and cries a lot. So I wanted this visit to be pleasant and I tried to prep myself before we left. I knew going in that I needed to keep myself in check around her. I knew there was a good chance she would say extremely negative and even insensitive things.

But I still failed to control myself. I failed miserably. So, once again, I fell extremely short of “being the light.” I didn’t keep my emotions in check and instead allowed myself to reach a boiling point. It may sound worse than it actually was, from my description. I couldn’t actually see Cathy from the other room. And it wasn’t like a screaming match or anything. But it was clear I was angry and I needed to get out of there.

I said my goodbyes to Charlie as he lay on the couch and he started to cry again as I encouraged him and told him he’d be up and running around again in no time. I grabbed my bag from the kitchen where Cathy and Linda were seated and said a long distance “Goodbye guys . . . love you” and we were off.

I immediately regretted getting so heated. I needed to fix it; I just wanted to make it right. About five minutes into the drive I tried calling Cathy’s cell phone. But, of course, she wouldn’t answer so I had to apologize to her voicemail. With a teary, shaky voice I simply said I was sorry for getting so upset . . . even threw in a “love you,” at the end. She never responded, but at least I tried. I apologized to Rick, too. Then I think I continued to cry for the first one and a half hours of the two hour drive back home. I was angry with myself for my lack of self-control and proceeded to beat myself up over it for the rest of the night.

I have felt for sometime that my heart has hardened over the years. And now with this lack of tolerance comes an inability to love as I should. I don’t want to be this way! This is a problem I cannot fix on my own; only the Lord can help me. I have prayed over this many times; I have prayed for God to “change my heart because I can’t.” I’ve also, from time to time, asked the Lord to show me anything in me that I’m not aware of so that I can repent of it and make it right.

Yesterday He did that for me. And I’ve been lamenting ever since. But I am grateful for this new pin-pointed awareness of my intolerance towards others (eesh, I hate saying it). Now I can pray on it specifically. I can work on my own self-control and God can work on softening my heart. Together we can beat this!

It would be worse to never know where I lack. It would be terrible to never improve because I can’t see where I need improvement. I don’t want to stay in the same place and never progress spiritually. I long to produce good fruit so I know this pruning is extremely necessary. And when my innards no longer get all twisted when I hear something I disagree with, well, that’s when I know this stronghold has been defeated.

Posted by thisgirlcalledmindy on August 16, 2020 in My Journey as a Follower of Jesus Christ, Personal Journal and tagged anger issues, Christian faith, Intolerance, self-righteousness, sin, strongholds.

This site uses Akismet to reduce spam. Learn how your comment data is processed.